With season 5 of Once Upon a Time set to premier this Sunday I thought  I’d make a list of just a few of the reasons why I have become completely and utterly obsessed with it. Like watch all 4 seasons in the space of two weeks on Netflix obsessed.

OUAT is set in the town of Storybrooke. It’s residents are all characters from fairy tales cursed to live in a world without magic and their memories by the Evil Witch, the fabulous Lana Parrilla. Transported from the Enchanted Forest and trapped for 28 years in modern day Maine, they are unaware of their former lives and the lack of their own ageing. The only hope of breaking the curse comes in the form of ‘The Savior’, Emma Swan (Jennifer Morrison), the daughter of Snow White (Ginnifer Goodwin) and Prince Charming (Josh Dallas), who they gave up as a baby to escape the curse. Add to this the scheming Rumpelstiltskin (the spectacular Robert Carlyle) driven by his quest to obtain power and find his long lost son and Henry (Jared Gilmore) the abandoned son of Emma and adopted son of Regina and you have a complex, often dark tale that weaves the lives of famous fictional characters together often through deceit, secrets and betrayal. Here’s my ten spoiler-free (kind of) list of why I might actually start watching it all the way from the beginning again before Sunday! 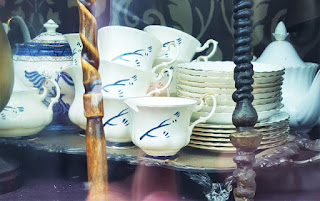 8. The identity of Peter Pan

6. Dual and even triple identities

What are some of your favourite moments, quotes and story lines from Once Upon a Time?

Are you excited for season 5 to begin?