“Robert Pinkerton used to say that a lie was like a dead coyote. The longer you leave it, the more it smells.”

Did you catch my 2016 Reading Challenge post? I’ve decided to set myself a little challenge; to read 50 books from of a diverse range of genres, themes and authors. I’ve made a list of 50 categories to help achieve this which features endless possibilities for both modern and classic fiction. My aim is to have read every one by the end of 2016. You can read the whole post here.

The second book I have completed in 2016 is Moriarty, a new Sherlock Holmes novel commissioned by the Conan Doyle Estate to one of the UK’s bestselling children’s authors, Anthony Horowitz. I’ll start by stating that I’m a huge fan of the BBC 1 show (I mean, who isn’t?) but as much I adore our curly-haired high functioning sociopath, it’s, in fact, Andrew Scott’s interpretation of the criminal mastermind Moriarty that I look forward to most. With this in mind, it was only a matter of time until I was drawn to Moriarty’s blood red cover and captivating tagline, “Sherlock Holmes is dead and darkness falls”. 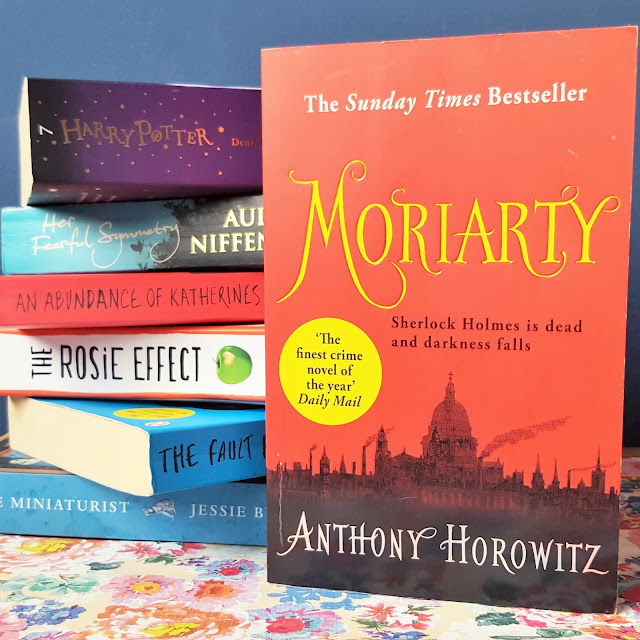 Now, I regretfully inform you that I’ve never actually read any of Conan Doyle’s novels. If you are of a similar position let me assure you, you will still enjoy this book. All you really need to know is that in Doyle’s “The Final Problem” (the inspiration for the spectacular season two finale), Holmes and Moriarty’s final face-off results in both adversaries plummeting to their deaths from the Reichenbach Falls, thus resulting in the collapse of Moriarty’s criminal empire and a bereft Dr Watson. This novel is set mere days after this in late nineteenth-century London.

It may surprise you that both Watson and Holmes are completely absent from this novel. In fact, our story revolves around two virtually unknown characters – an American detective called Frederick Chase and Athelney Jones, a detective inspector from Scotland Yard. Jones is a devoted student of Holmes’s methods of deduction (although some would argue he is morbidly obsessed with the fallen hero), whilst Chase is an outsider, a New York detective in search of a man considered more ruthless, loathsome and vile than London has ever known. A man with an underground criminal network that, in the absence of Moriarty, looks set to engulf London. When a series of gruesome murders confirms this, our duo set about unmasking this new formidable villain before he succeeds in bringing London to its knees.

I initially thought this novel was a little slow, however from chapter five onwards I was hooked. I found the twist and turns in this detective novel incredibly stylish and original. I was surprised, intrigued and captivated throughout. It has an incredibly well-designed plot, a novel I’d actually recommend reading twice to fully appreciate it’s artistry. I’ve overheard other readers expressing a feeling of frustration and angst whilst reading the final chapters however I relished in their genius.