I found this tag on one of my favourite lifestyle and food blogs, Cakey Dreamer and thought I’d give it a go for some fun; I mean, who doesn’t love Disney? Don’t forget to check out last week’s Harry Potter Tag and please let me know if you attempt this challenge in the comments below. 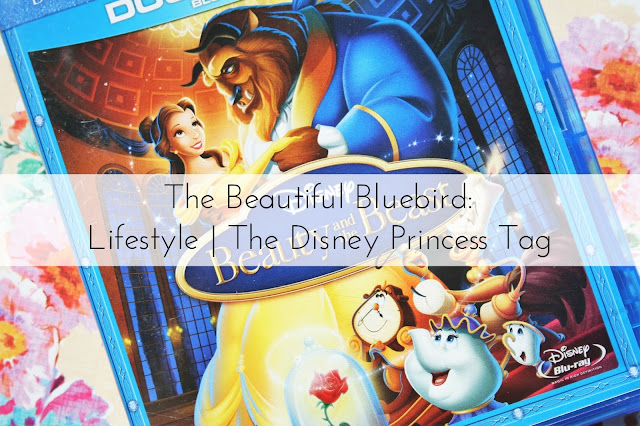 1. Which princess do you adore the most?
Belle, although not technically a princess, she’s the one female character that I resonated with the most. Maybe it’s because of her love of books or maybe it’s because I had the full outfit as a child so I always played her in our games.

2. Which princess do you like the least?
Tiana from the Princess and the Frog. I didn’t really connect with that film at all. I can’t remember a single song, which is unlike me when it comes to Disney movies and I found most of the characters forgettable and cliche.

3. Which princess do you relate to the most?
I’d love to say someone bad ass like Merida from Brave, because you know, I’m a Scottish and have curly red hair at the moment, but realistically it would probably someone like Belle or Ariel. I love books but I’m also a little bit naive and ditsy.

4. Which sidekick do you wish you had?
Having my own gang of mice or birds to do all my housework would be ideal but I think I’ll go for Pegasus, because how doesn’t want a flying horse that’s a bit sassy?

5. Which best friend would you like to hang out with?
Someone cute a cuddly like Mekko from Pocahontas.

6. Which prince would you fall in love with?
No really a fan of any of the princes to be honest. I’ll go for the old cliche of Prince Charming.

7. Which parents would raise you?
Aren’t a lot of them missing or dead? Maybe be a dad like the Sultan or Jane’s Dad (from Tarzan), I cannot for the life of me think of a Disney mum that stands out.

8. Which castle would you live in?
The beast’s castle because of musical staff and a massive library.

9. Which town would you live in?
Not sure about a town but I’d love to live somewhere magical like Neverland or Wonderland.

10. Which dress do you wish that you owned?
Either Belle’s yellow ball gown or Cinderella’s blue one.

11. Which voice do you wish you had?
Queen Elsa’s from Frozen (I know so much cheating). Who wouldn’t want to sound like Idina Menzel when belting out Let it Go.

12. Which two princesses would be friends?
Alice and Wendy or Merida and Mulan. 13. Which two princesses do you think would hate each other?
Merida and any princess who marries their price within 24 hours of meeting them like Snow White or Aurora.

14. Which two sidekicks would make a good duo?
Olaf and Mushu would make the ultimate comedy duo.

15. Which two princes would be best buds?
Perhaps two thieves with a heart of gold: Flynn and Aladdin?

16. What scene makes you cry most?
Again, nothing to do with princesses but I can’t help thinking about Bambi, The Lion King, UP and the Fox & the Hound when I think about Disney related tears.

17. Which scene makes you cheer with happiness?
When Elsa rescued Anna. Love that she was her true love and the Disney opted for a bit of girl power for once.

18. What scene makes you cringe most?
Jasmine flirting and kissing Jafar was a little disturbing.

19. Which story do you wish was your life?
Cinderella? I want a fairy godmother and mice friends who make me dresses.

20. Which movie do you love most?
Beauty and the Beast. There’s just something about the music that gives me chills.

Yes, I know. I cheated ALOT. It was harder than I first thought. Thanks to the lovely Sian from the Cakey Dreamer for sharing this.