I don’t want to play the ‘I’m a mum – poor me!’ card, but trying to find the time to sit down and get lost in a book nowadays is almost impossible. If I do find the time, I’m often plagued by blogger guilt and find some other task or chore to fill my time with. I can’t remember the last time I actually finished a book, I think it was Miss Peregrine’s Home for Peculiar Children. The sequels to which are still sitting upstairs untouched in my wardrobe somewhere. I’m embarrassed to admit that I gave up on four books last year including The Wild by Cheryl Stayed and The Goldfinch by Donna Tartt. 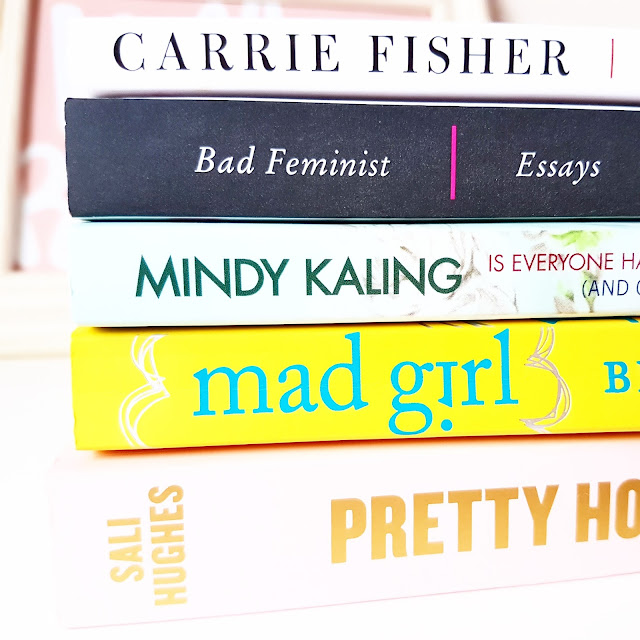 I was lucky enough to receive a pile books for my birthday and Christmas that I can’t wait to get stuck into. I’m making it a rule that as soon as Penny goes for a nap I resist the urge to Dettol the house or make a to-do list of tasks that I’d rather iron my hands than actually start to tackle. Instead, I’m going to fire up the new love in my life, my Dolce Gusto coffee machine, and read until the caffeine starts to wear off. Here’s a list of what I’ll be reading this year…

“Bryony Gordon has OCD. It’s the snake in her brain that has told her ever since she was a teenager that her world is about to come crashing down: that her family might die if she doesn’t repeat a phrase 5 times, or that she might have murdered someone and forgotten about it. It’s caused alopecia, bulimia, and drug dependency. And Bryony is sick of it. Keeping silent about her illness has given it a cachet it simply does not deserve, so here she shares her story with trademark wit and dazzling honesty.”

Talking as Fast as I Can by Lauren Graham

“In Talking as Fast as I Can, Lauren Graham hits pause for a moment and looks back on her life, sharing laugh-out-loud stories about growing up, starting out as an actress, and years later, sitting in her trailer on the Parenthood set and asking herself, ‘Did you, um, make it?’ She opens up about the challenges of being single in Hollywood (‘Strangers were worried about me; that’s how long I was single!’), the time she was asked to audition her butt for a role, and her experience being a judge on Project Runway (‘It’s like I had a fashion-induced blackout.’) In ‘What It Was Like, Part One’, for the first time Graham settles in for an epic Gilmore Girls marathon and reflects on being cast as the fast-talking Lorelai Gilmore. The essay ‘What It Was Like, Part Two’ reveals how it felt to pick up the role again nine years later, and what doing so meant to her.”

“In these funny and insightful essays, Roxane Gay takes us through the journey of her evolution as a woman (Sweet Valley High) of colour (The Help) while also taking readers on a ride through culture of the last few years (Girls, Django in Chains) and commenting on the state of feminism today (abortion, Chris Brown). The portrait that emerges is not only one of an incredibly insightful woman continually growing to understand herself and our society, but also one of our culture.

Bad Feminist is a sharp, funny and sincere look at the ways in which the culture we consume becomes who we are, and an inspiring call-to-arms of all the ways we still need to do better.”

“Mindy Kaling has lived many lives: comedienne, actress, obedient child of immigrant professionals and, now, writer. With a blend of witty confessions and unscientific observations, Mindy writes about everything from being a timid young chubster afraid of her own bike to living the Hollywood life, dating, friendships and planning her own funeral – all executed with several conveniently placed stopping points for you to run errands and make phone calls.”

“In Pretty Honest, Sali Hughes draws on over 20 years of wisdom, advice and expertise to show real women how to make the most of makeup’s physically and emotionally transformative powers. Covering everything from teenage skin to mature beauty, botox to bridal make-up, sickness to good health, it’s a work that is part instruction manual, part love letter to makeup – in a writing style that combines beauty editor, feminist and painfully funny best friend.”

“In Wishful Drinking, Carrie Fisher tells the true and intoxicating story of her life with inimitable wit. Born to celebrity parents, she was picked to play a princess in a little movie called Star Wars when she was only 19 years old. “But it isn’t all sweetness and light sabres.” Alas, aside from a demanding career and her role as a single mother (not to mention the hyperspace hairdo), Carrie also spends her free time battling addiction and weathering the wild ride of manic depression. It’s an incredible tale – from having Elizabeth Taylor as a stepmother, to marrying (and divorcing) Paul Simon, and from having the father of her daughter leave her for a man, to ultimately waking up one morning and finding a friend dead beside her in bed.”