After finishing Mad Girl by Bryony Gordon it was a hard decision to chose what book to start next. You just have to read my Birthday & Christmas Book Haul to see how tall the pile of books sitting by my bed is. One morning, as I waited for the kettle to boil, I crept into Penny’s room and peeked into her cot, to my delight she had fallen back to sleep. I rushed downstairs, grabbed my latte and chocolate biscuit, waited for Netflix to load and watched my very favourite episode of Gilmore Girls: Raincoats & Recipes. It makes my heart ache that the revival has been and gone. The finale gave fans a tiny sliver of hope that another reunion may be on the cards (shhh, remember the rule: don’t spoil the last four words!) but that could be years away, so I decided to read Talking As Fast As I Can by Lauren Graham as kind of a last farewell. 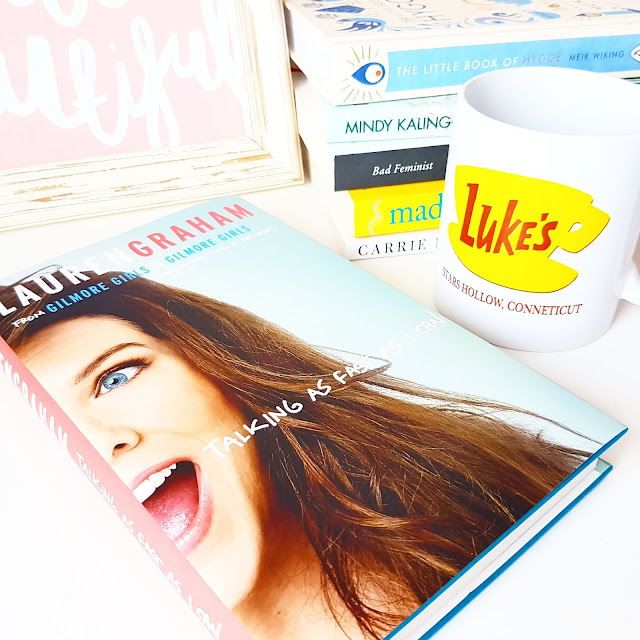 If I ever needed further proof that Lauren Graham was destined to play Lorelai Gilmore Talking as Fast as I Can delivers just that. Each page reads as if you’re sitting at your favourite coffee shop listening to your best friend rant and rave about the latest fad diet, her (totally harmless) obsession with Ellen, Project Runway, her alter-ego Old Lady Jackson, the qualities of the perfect paper towel, living on a houseboat and ‘making it’ in Hollywood. There’s a beautiful randomness to her thought process that makes each chapter so unique and fun to read.

Gilmore Girl fans won’t be disappointed, there’s plenty of inside stories and anecdotes that will make you smile and even shed a tear, such as the casts tributes to the late and wonderful Edward Herrmann and Carol King’s impromptu performance at Miss Patty’s. If you’re looking for salacious gossip you’ve come to the wrong place; that’s not Lauren’s style and there’s none to tell. The cast were a family and that’s why the show was as successful as it was.

I finished the book in just two days and although I thought it might give me some sort of closure, it seems that the only logical thing to do now is to watch Gilmore Girls from the very beginning again. After months and months of counting down the days until the revival, I can’t believe it’s finally all over, “although… anyone else notice that the ending is really more of a cliffhanger?”